Being fast and accurate isn’t always as easy as it sounds. News managers put a lot of pressure on producers, anchors and reporters to spit breaking news out as fast as possible. A manager’s priority is to get breaking news online and on air faster than the competition. But speed lends itself to errors when there’s not enough time to properly confirm the facts.

One example that made headlines was when CNN wrongly identified the Boston marathon bomber. I was an assistant news director at the time and we were doing wall-to-wall live coverage of the attack. CNN actually aired a man’s picture and claimed he was arrested for the bombing. I told my producers to wait until we could confirm it. We searched online and couldn’t find any credible reason to believe that CNN was right. And CNN is one of the most credible news sources in the world. Most American TV stations actually pay to subscribe to CNN Newsource because it’s truly considered reliable. FOX and AP even reported on CNN’s “suspect.”

Turns out, they had the wrong guy. So who cares? That guy cared a lot. In minutes he was swarmed with hate messages from hundreds of people assuming that CNN was right. His name and picture will forever be tied to the bombings online even after CNN retracted the story.

Another example is when several news organizations mistakenly reported that Congresswoman Gabriel Giffords was killed in the Tucson, AZ attack. HBO’s “The Newsroom” used the event as the topic for one of their episodes. This is one of those shows I’m always asked about because viewers wonder how realistic “The Newsroom” is. Though there are some things I would change with the show to make it more authentic, it actually does a pretty good job of representing what happens in a newsroom. I suggest you watch this clip of the show to get a feel for what happens during big breaking news situations.

Right now in the broadcast news world, breaking news is the biggest driver to boost ratings. Though some shops still focus their brand on storytelling, many switched to breaking news because it’s more immediate. With the rise in push notifications, social media, and news apps, it’s now more important to be fast with breaking news. But that can be difficult when you don’t have a press release or web story to write around.

In most breaking news scenarios you will be interacting with a PIO (public information officer). This spokesperson is usually going to represent a county or city law enforcement agency like a police department or sheriff’s office.

Some agencies are more media friendly than others. Here is an example from the Polk County Sheriff’s Office that not only gives you an idea of the type of information you will get in a press conference but also shows you the relationship the media has with law enforcement.

At the end of the day, we need each other to do our jobs well.

Some officials have great TV personalities. Some are very active on social media. Others are not. Get to know the official leaders in your viewing area. Check out Polk County Sheriff Grady Judd on Facebook, Twitter and YouTube.

As you watch pay attention to:

One tool I always use during breaking news is the most recent filter in a search engine’s news tab. It is the most efficient way to make sure you catch any new details coming in about the story you’re following. For example, if I were following Obama’s trip to Cuba, I would search “Obama” and “Cuba.” But take a look at the responses a traditional search would return: 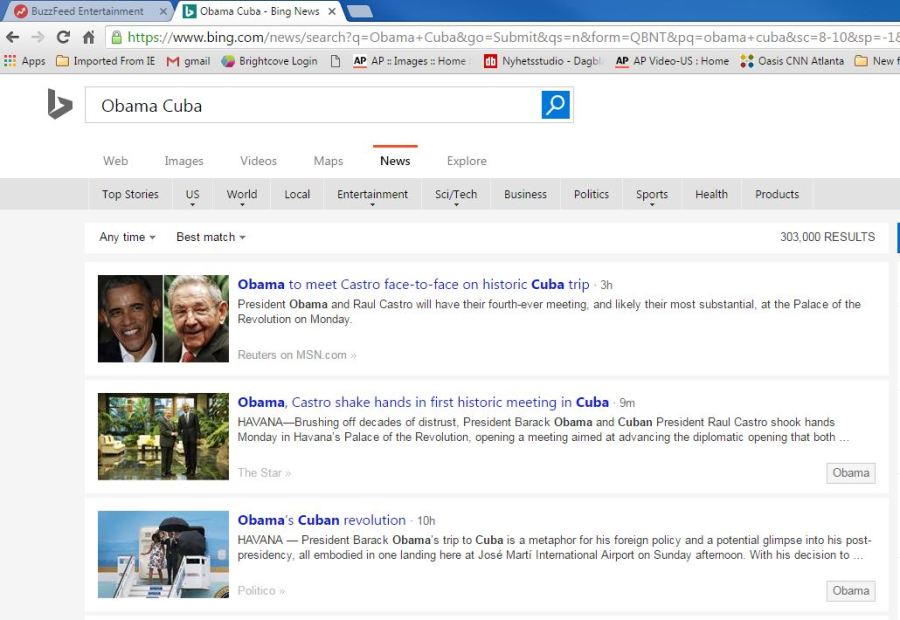 The news is generally going to be more”reliable” but it will generally also be older. The top result is three hours old. But when I switch it from “best match” to “most recent” I get brand new results. I suggest using this as a reporter and producer for the most up to date info:

Now you see the top result is only two minutes old.

I am an instructional designer and TV news instructor at the University of South Florida. My passion for innovating learning led me to pursue my PhD in Curriculum and Instruction with a concentration in Instructional Technology. I love creating media to enhance eLearning and foster online engagement. I teach students to create multimedia stories for broadcast, web and social media platforms. I lead the Florida Focus class where students produce daily news shows that air on Tampa's PBS station. My reporting classes collaborated with Tampa's NPR station to produce award-winning stories. I am an Emmy Award-winning journalist. I produced thousands of hours of TV news in some of America's largest media markets at Tampa's NBC station, San Diego's ABC station and the San Diego Union-Tribune. I also produced immersive 360-degree virtual tours at the University of South Florida and reported for Hashtag Our Stories. View more posts